What you need to know

before you get your own Ragdoll Kitten!

Ragdoll Cats are amazing companions and you should expect tons of fun, Ragdoll cats can’t live alone, you’ll be the main source of care provider so it is important to consider the responsibilities involved in getting an indoor Ragdoll kitten and make sure you’re up for the challenge. This Ragdoll FAQs will help you with making the right decision.

Our Ragdoll Cats and Kittens FAQs

These are the most popular questions asked!

We encourage you to read the following answers to most of the questions you may have in mind, surely this section will be helpful regardless if it’s a Ragdoll kitten or an older Ragdoll cat! 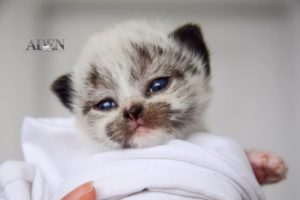 What is the nature of the cat you want?

This might seem stranger to most people, it is a fact that cats (like all other animals) actually have unique personalities, just like human kind. This means that while shopping kittens to adopt, you need to know what nature you are looking for. Kittens are usually born with a bit of their mother’s nature. If she was out-going and friendly, the kitten will have this nature. Of course, cats deliver in packs, so we cannot expect all kittens to have the same nature. Therefore, it is important to keep your mind open when you are looking for Ragdoll kittens in Ontario.  Mostly, owners of kittens can influence the nature of the kitten within the first twelve weeks after their birth. If you want them to be friendly and outgoing, you need to make them socialize a lot during this time.

If you are looking for Ragdolls in Ontario, it is better to get a Ragdoll kitten rather than grown Ragdoll cats. You cannot change the nature of a grown cat. Therefore, adopting a kitten is the better choice.

Should we get a Ragdoll male or female kitten?

Considering the benefits of a male or female Ragdoll kitten can be really complex since they both share the same characteristics of loyalty, playfulness, and sheer beauty. However, choosing a female because of the fear of the male messing up your house with urine is a wrong notion. A de-sexed male Ragdoll would not do this and as such we advise all Ragdoll kitten owners to de-sex them when they are still very young. Male Ragdolls are bigger eventually, but the method of socializing them would eventually be the major determinant as regards their behavior and temperament. Males are as good as females.

You need to know a little about Ragdoll Cat before you can be sure about if they are better than other cats. Ragdolls have cutest natures of this species is that it goes limp when picked; hence the name ‘Ragdoll.’ Their nature is always gentle, affectionate and they are easy to handle. They have a relaxed temperament, which can be a problem because they tend to head towards moving cars and any stray animal, which can get them hurt. Therefore, if you want to own a Birman or Persian cat, it is better to get yourself a Ragdoll kitten instead.

How many Ragdoll kittens should we get?

The answer is simple: get two Ragdoll Kittens for their own sake. Ragdolls are very social cats, very playful, and love company. Having one single Ragdoll kitten in the house can be quite depressing for the cat and that may result in him/her playing with your furniture instead, which may damage the outlook. Having two of them in the house further enhances stimulation and companionship even when nobody is with them. It is indeed a beautiful thing to watch two Ragdoll kittens play and have fun.

Is it ok to get two Ragdoll kittens from the same litter?

Better to get them from the same litter. This is even more important because they are of the same age and kinship. In other words, the problem of introducing a Ragdoll kitten to an adult cat later that might result in hostility would have been totally eliminated. It is possible to introduce a Ragdoll kitten later but far easier when they grow up together.

Often, Ragdoll kitten from backyards breeder are not safe to adopt. They might be not registered or not purebred Ragdolls or may have diseases that can make owning the Ragdoll cat a problem in future. This is why; it is better to adopt a Ragdoll kitten from a good Ragdoll breeder where they know their kitten is a pure breed (and can guarantee it healthy) and has received vaccination against threatening illnesses.

Do they have to be the same gender?

For de-sexed Ragdolls, it really doesn’t matter what sex the new one is when being introduced. The important thing is that they get less territorial when de-sexed and would love new company. But you need to introduce them slowly and carefully.

What steps should I follow to get my new Ragdoll kitten used to my older cat?

Patience and a lot of care is the key here. Wrap the Ragdoll kitten in a towel and drop the towel in the sleeping area of the older established cat and then allow him/her to take time sniffing and getting used to the scent for about a week or two; at the same time, do the same thing for the Ragdoll kitten to sniff; and then bring them together slowly. Don’t be shocked at the initial reaction of growling and hissing, it is their nature. With time, they would certainly bond well.

At what age can I adopt my Ragdoll kitten?

From research and experience, Ragdoll kittens taken away from their mothers earlier than 11 -12 weeks of age tend to exhibit behavioural problems; Aden Ragdolls will not release the kittens before that age; for your good, our commitment, and the Ragdoll cat’s future happiness.

Yes, in fact they do not require too large a space to live in and are content even in small apartments. Leaving them outside all by themselves exposes them to harm from other animals or passersby who may harm or take them away. That is how innocent they are.

Can people with allergies be around Ragdolls?

Allergies are known to cut across breeds of cats; it is not a Ragdoll issue. My advice is that you try out staying close to one for a while and see how your system reacts before deciding to have one of your own. Allergies can often be controlled with over the counter or prescription medications.

Do Ragdoll cats require much grooming?

Ragdolls are perhaps the cleanest breed of cats with semi-long coat that is silky, non-matting, and bunny like. A thorough brushing with emphasis on the underarm and knickerbockers would do. You might decide to bathe them but don’t forget to brush even more often during springtime when they shed their winter coat.